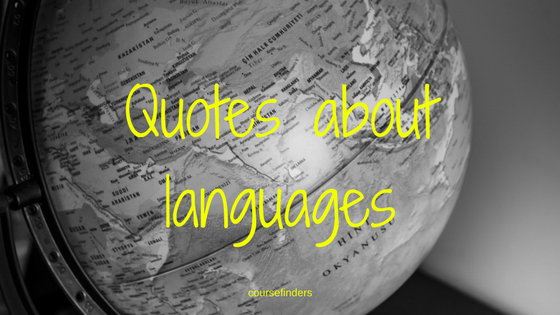 The European Day of Languages was only a few days ago (you can read the article here), but that doesn’t mean that languages aren’t important today. We need languages to speak and to understand each other. Because of that there are also a lot of quotes about languages which could be very inspiring and good for your motivation.

“There’s no such thing as dead languages, only dormant minds.”
– Carlos Ruiz Zafón

“The dictionary is based on the hypthesis – obviously an unproven one – that languages are made up of equivalent synonyms.
– Jorge Luis Borges

“Belladonna. In Italian a beautiful lady; in English a deadly poison. A striking example of the essential identity of the two tongues.”
– Ambrose Bierce

“One forgets words as one forgets names. One’s vocabulary needs constant fertilizing or it will die.”
– Evelyn Waugh

“In the lives of individuals and societies, language is a factor of greater importance than any other. For the study of language to remain solely the business of a handful of specialists would be a quite unacceptable state of affairs.”
– Ferdinand de Saussure.

“The individual’s whole experience is built upon the plan of his language.”
– Henri Delacroix

“The problem with defending the purity of the English language is that English is about as pure as a cribhouse whore. We don’t just borrow words; on occasion, English has pursued other languages down alleyways to beat them unconscious and rifle their pockets for new vocabulary.”
– James D. Nicoll

“To have another language is to possess a second soul.”
– Charlemagne

“If we spoke a different language, we would perceive a somewhat different world.”
– Ludwig Wittgenstein

“One language sets you in a corridor for life. Two languages open every door along the way.”
– Frank Smith

These quotes could inspire you to plan your next language journey and to learn a new language.