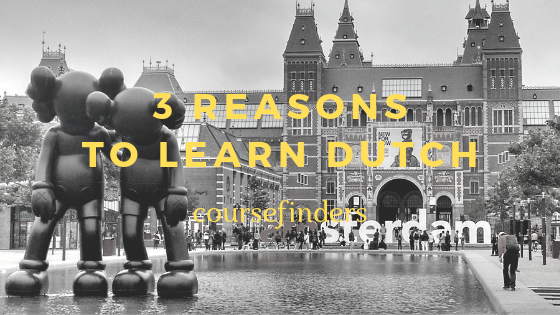 There are many reasons to learn Dutch. The language is part of the West Germanic languages (like English and German) and is spoken in the Netherlands, but also in Belgium and some other small parts in different countries. If you want to attend a language class to learn Dutch, you could check our language schools on CourseFinders.com.

1) Dutch is an easy language for English speakers.

Because of the same language family Dutch is – for English speakers – very easy to learn (in comparison to other language). If you already have an upper level in English or if you are a native speaker, you will understand also a few and simple sentences. For example: “What is your name?” is “Wat is jouw naam?” in Dutch.

One of the most important reasons to learn Dutch is that is very funny to speak. You have a lot of vowels, difficult and sometimes strange sounds and words which seems to be tongue twisters. But if you practice, you will get better every day.

3) You can travel in different countries.

Dutch is the third larges Germanic language (after English and German) and could help you to find friends in different countries. The language isn’t only spoken in the Netherlands, but also in Belgium, Saint Maarten or on the Caribbean islands of Aruba. Easier travelling could be one of your reasons to learn Dutch.

With enough reasons to learn Dutch you could search for a language school. You can find schools in Amsterdam, but also in other cities on CourseFinders.com. So search now!