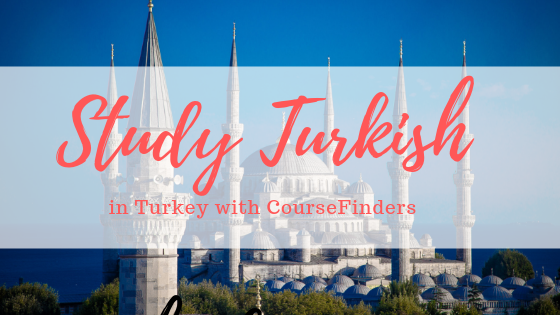 If you want to study Turkish in Turkey, CourseFinders can help you. Turkey is located mainly in Western Asia, but has also a small part in Southeast Europe which combines different cultures. Moreover, it is an adventure for every language learner to explore the country, different cities and to learn a lot about the spoken languages (like Turkish, Zaza, Arabic and others).

Reasons to study Turkish in Turkey

1) Turkish is not only spoken in Turkey

2) Turkish is a good language for work

If you want to get a better job or to earn more money, Turkish could help you. Many sectors have seeds in Turkey and so it is a good idea to study Turkish in Turkey. You could get in contact with the country, but also with different companies.

There aren’t many Turkish people who know English or other languages. So, if you want to travel in Turkey, it could be necessary to understand and to speak Turkish. The best thing you could do is to study Turkish in advance.

What you could do during your project “study Turkish in Turkey”

In Istanbul the Topkapi Palace is a highlight. There, you could learn more about Islamic art and about Mehmet the Conqueror who built this palace. In addition, you should also visit the ancient Hippodrome during your project “study Turkish in Turkey”.

Of course, you can study Turkish in every city in Turkey, but one of the most famous ones is Antalya. The main square of the old town has a stone-clad clock tower which is a must-see. A wonderful place is also the old harbour.

If you attend a language class in Izmir, you can visit the Kemeralti Market which is home to shops, mosques, coffeehouses, tea gardens and a lot more. In the city centre you can find the ruin Agora which was ruined in an earthquake and rebuilt by Marcus Aurelius.

It doesn’t matter in which city you are. The most important thing is to study Turkish in Turkey. Studying a language where it is originally spoken is much easier and you will make more progress. Search now and start your next adventure!