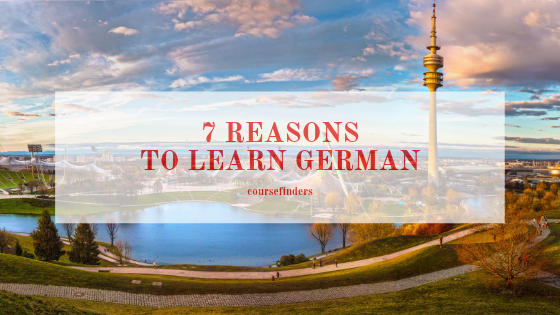 Do you want to learn a new language or are you looking for your next challenge? The answer could be very easy: Reasons to learn German! On the one hand German can help you to get your dream job, on the other hand you can find friends from all over the world.

And in addition, Germany has many things to offer. You can discover a wonderful language, uncomplicated food, old traditions, nice landscapes and a lot more.

Because of three countries where German is spoken, you are spoilt for choice. Search directly for a language school in Germany, Austria or Switzerland and start a new adventure by travelling and learning a new language.

Learning German means a lot of fun, but it is also a lot of work. But the most important thing is that German is one of the languages which are use all over the world.

#1 German has many similarities

German has many similarities with other languages which are part of the Germanic language family. Therefore, you may be able to understand words without really having learnt them. Here are some examples for English/German and Swedish/German:

#2 Germany has many international companies

Here is the second reason to learn German: Germany has many companies that operate internationally (for example Bosch, Volkswagen and Siemens). Therefore, language skills in German, but also in other languages can be advantageous.

#3 German is the mother tongue of famous persons

#4 German is spoken in different countries

German is not only spoken in Germany, but in various European countries. So you can also use your German skills in Switzerland, Austria, Northern Italy, Eastern France, Luxembourg and Belgium. German is as it were an all-rounder.

#5 Germany is a large export country

Germany is also one of the largest export countries in the world. This means that not only the products, but also the language is used internationally and holds a high value in the economic field.

#6 German is one of the 12 world languages

German is one of the most widely spoken languages in the world and is among the 12 world languages.

#7 Many books are written and published in German

About 18% of the books published all over the world are written and published in German. Only a small part of them are translated into other languages. So this could also be a reason to learn German!

As you can see, there are many reasons why it is a great idea to learn German. If you want to learn more about language school in Germany, you could search by yourself on CourseFinders.com or you can read our detailed article Study German in Germany for college or work.

Moreover, we also published other articles about German which you can find in our blog.