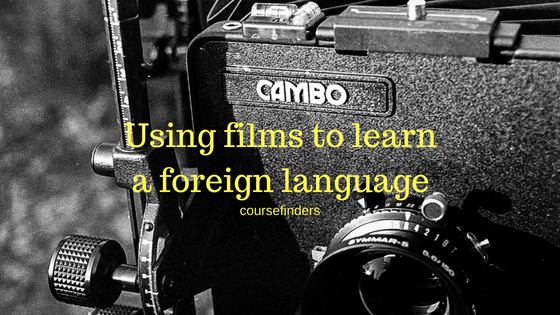 Films and series are a good possibility to learn a foreign language. You can learn new words, get in touch with different accents and dialects and learn a language with a lot of fun. In addition, you will get more information about the real language and not about the language in your textbooks. But how can you use films?

Subtitles could help you to understand the spoken language. But: The subtitles should be in the same language as the audio. So you could hear the words and sentences and read them at the same time.

A film could be interesting or boring and only if you watch an interesting one you will watch it until the end. So choose films which sound interesting and which you want to watch.

If you like action movies, use it for your learning method. In comparison, if you like romantic films, use these ones to learn a foreign language.

#3 Select a film with the right language level!

There are always films which are more difficult than others. So if you are a beginner in your learning language, select a film with an easy story (like films for kids). If you are an advanced learner, you could also choose a film with different dialects.

#4 You don’t have to understand every word!

You will always get in touch with unknown words, but that’s not important. Sometimes you miss only a word, sometimes a sentence and sometimes also a lot of sentences. But it’s ok. Watching films should be fun and it is only necessary that you are able to follow the story.

#5 Watch films in your foreign language as a matter of routine.

Start watching a film in your foreign language once a week. After that you could try it twice a week. But the important thing is that you have a routine which helps you to improve your language skills!